The sun shone (mostly) on the cream of Ireland`s Youth Track Cyclists in Belfast at the weekend where the competition for the Inter-provincial Championship, and the Seán MacAogin trophy took place at the Orangefield Track. 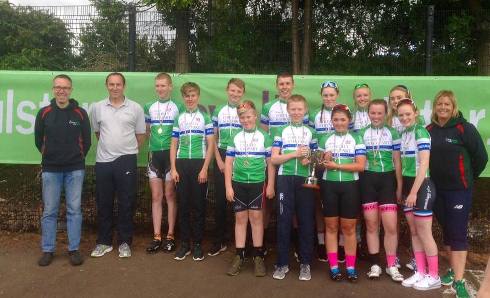 In the `senior` Under 16 Category, Leinster`s David O`Sullivan took the competition to Ulster, narrowly losing out on the win in the 500metre Time Trial by less than half a second, but getting his own back by taking the win in the 3k Scratch. The Ulster nemesis on both occasions was recent European Youth Olympic rider Shay Donley.

Leinster also provided the winner of the Under 14 Time trial in the shape of Andrew Kelly, but Ulster were dominant in the Scratch event, taking all four points-scoring places.

Likewise in the Under 12 category, it was Ulster`s Girls – Katie Neill, Maria McAllister and Amber Young who dominated the events but spirited performances by Leinster riders saw the competition tight throughout the day.

At the end of a full day`s competition, with emphatic wins in the Team and Italian Pursuit events, Ulster again ran out the winners of the competition and will have their name engraved on the Seán MacAogin trophy for the 4th year in succession.

Well done to all riders and the Provincial Coaches and Managers who made the event a success once again.

For more information on the accreditation sessions for 2020 please